Long lines, delayed voting and short supplies were a symbol of the confusion that abounded as thousands of Nevadans caucused for Democratic and Republican presidential nominees Saturday - many for the first time.

In quintessential Nevada style, at least two caucuses in a small northern towns came down to a draw of the cards.

At the Jacks Valley Elementary School in Genoa, the number of votes in District No. 5 were split: Sen. Hillary Rodham Clinton and Sen. Barack Obama were tied with 26 votes apiece.

According to Democratic rules, caucus chair Nancy Downey shuffled up a deck of cards, ironically with "Hillary" on the back, and spread them out on a table with fold-up legs.

A Clinton backer drew a five. An Obama supporter pulled out a king. The crowd whooped. Obama earned two delegates, while Clinton got one.

"I drew the five to lose to the king," said Clinton backer Greg Kuntz, a 45-year-old special education teacher in South Lake Tahoe. "Only in Nevada."

A similar Old West tiebreaker played out at Zephyr Cove along Lake Tahoe, where the two candidates tied 24-24. Again the Clinton camp drew a five only to be trumped by a nine.

From casinos on the Las Vegas Strip to the Cowboy Bar and Cafe 400 miles northeast, Nevadans flooded caucus sites in record numbers.

Four years ago, Democrats were overjoyed when 9,000 turned out to caucus. With 88 percent of districts reporting, Democrats had 114,000 participants, and more than 43,000 took part in the GOP straw poll.

Precinct workers ran out of registration forms and preference cards for about 200 people who turned out to caucus at Doris French Elementary School near UNLV and McCarran International Airport.

"We have nothing. We've run out of everything," precinct captain Naomi Catlin said as she sent out for more forms. "But the turnout has been fabulous."

MGM Grand maid Sedalia Loucious, 49, got teary-eyed while standing in line before a busy ballroom at the Bellagio hotel-casino.

She ignored the tit-for-tat between the Obama and Clinton campaigns, including a last-minute lawsuit by Nevada teachers to take away her right to caucus at one of nine at-large sites set up on the Strip. On Thursday, the legal challenge failed.

"Most of all I'm supporting Obama because he is black," Loucious said, wiping her eyes. "In later years, I can tell my children that I was there."

Traditionally relegated to holding a caucus too late to influence the race, Nevadans were thrust into the spotlight due in no small part to Senate Majority Leader Harry Reid's argument that his home state was the perfect place for Democrats to take advantage of their growing strength in the West and reach out to an electorate more diversified than Iowa and New Hampshire.

Nevada Republicans followed suit, with a little different format and a lot less attention from the candidates.

Campaigning continued up until the last minute.

Before the Democrats opened their caucuses, Bill and Chelsea Clinton worked the employee cafeteria at the MGM Grand casino, handing out buttons and fliers encouraging workers to split from their union.

"I support my union, I support Hillary," the fliers said.

Later, Bill Clinton stood near the doorway at The Mirage caucus site, shaking hands, taking photographs and encouraging casino workers to split from their union and support his wife.

Hillary Clinton campaigned at the Mandalay Bay hotel-casino, and Obama put in appearances at the Bellagio and Mirage resorts.

In the Reno area, caucus sites were overflowing with GOP participants.

"It was overwhelming. We had people out to the football field," GOP spokeswoman Randi Thompson said at Galena High School, where voting ran two hours late.

In Sparks, party officials temporarily ran out of ballots at Reed High School and the attendees from 20 different precincts complained they couldn't hear.

Emotions ran high. In the Bellagio ballroom, some 200 people stood on each side of the caucus room, shouting loudly with rows of empty chairs separating them. On one side of the room, Clinton backers waved blue signs while the Obama supporters in red T-shirts shouted back.

When Clinton won at the site with a 271-191 win over Obama, her side of the room erupted in cheers, while the Obama side filtered out dejectedly.

Robert Ragan, a 52-year-old casino host at the Bellagio, was one of eight John Edwards' supporters who refused to realign with others when caucus rules deemed their group was not large enough to continue.

"I don't believe in pandering," he said as the room emptied. "It's still early."

At Green Valley High School in Henderson, where thousands of
Republicans turned out to cast their ballots, Mitt Romney's son, Josh, worked the crowd before caucusing officially began, stretching for last-minute votes even as his father Romney was declared the winner by The Associated Press.

In the rural Searchlight precinct, Reid and his wife Landra were the only two uncommitted voters as 35 votes were cast for Clinton, 20 for Edwards and 12 for Obama.

At Rancho High School, in a largely Hispanic neighborhood of Las Vegas, low turnout left Republicans short of the number of people needed to select delegates to the county convention.

In one classroom, 30 participants from 14 precincts sat at school desks and tried to figure out how to pick 23 delegates and 23 alternates.

"This is the Republican Party. We're fighting for our lives here!" Didi Lima, precinct captain, cajoled from the front of the room. "Do you want a Democrat in the White House? Then come on, volunteer."

Some 120 miles northwest, in rural Beatty near the proposed Yucca Mountain nuclear waste dump, a dozen people turned out at the senior center where 268 Republicans were registered.

Although both parties posted caucus primers on their Web sites, and newspapers published special sections explaining how the process works, officials said many people were confused about where to go and what to do.

Some said they were frustrated with the unfamiliar process.

Bert Bertram, a longtime Beatty resident and first-time caucus-goer, said he would prefer having primaries throughout the United States to be held on the same day. "This is madness the way they're spreading things out," he said.

Sen. John Ensign, R-Nev., wasn't sold on the caucus format. "We might be better with a primary than a caucus because it was so confusing for so many people," he said.

Part of the confusion lay with the parties' different rules.

Democrats use a complicated mathematical formula in which voters
divide into groups based on the candidates they support. For a candidate to win a delegate, they must receive a minimum number of
votes based on the number of voters in the precinct.

Unlike the Democrats, the Republican caucus does not bind delegates who will be elected at the state convention. The GOP version is a straw poll in which caucus-goers simply cast paper ballots for their preferred candidate.

Another difference: people can register at Democratic caucus sites - or even change their registration from GOP to Democrat - while Republican caucus attendees had to be registered 30 days ago.

Garibay said he endured barbs from his wife and co-workers for taking unpaid time off work to participate in the caucus.

"I was told you could go to the caucus or you could go to work," he said, standing beneath chandeliers outside a large ballroom. "This is a big deal to me."
---
Associated Press Writers Scott Sonner and Sandra Chereb in Reno,
Martin Griffith in Sparks and Kathleen Hennessey, Ken Ritter, Nedra
Pickler and Brendan Riley in Las Vegas contributed to this report. 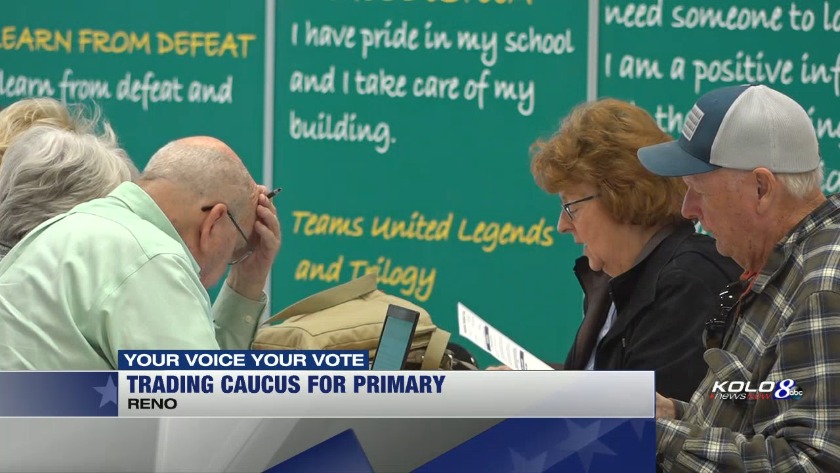