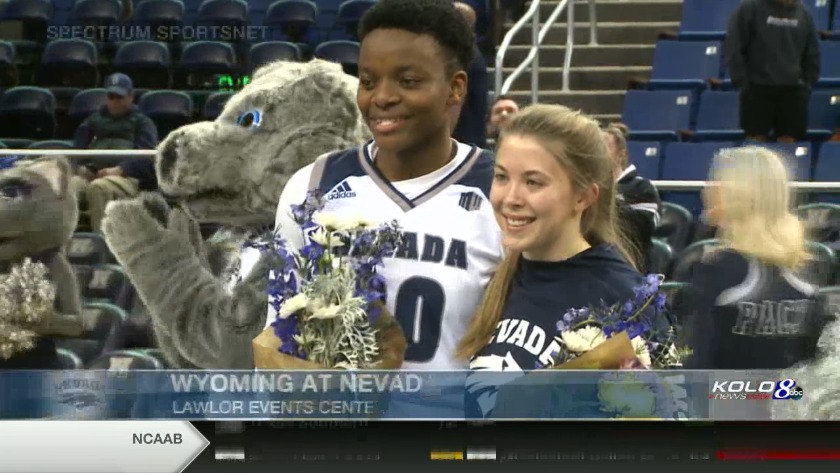 The Cowgirls (15-11, 11-6 MW) were red hot on offense for a majority of the game, and held a high advantage on the glass to knock off the Wolf Pack (14-14, 7-10 MW) at home. Wyoming shot a season-high 55.0 percent from beyond the arc, knocking down 11 3-pointers in total. Nevada was no slouch from the 3-point line either, also connecting on a season-best 53.3 percent, but made three fewer triples than its opponent. The Pack was led in its 3-point shooting by sophomore Da’Ja Hamilton who, for the second straight game, hit three from long range.

On offense the Wolf Pack posted a solid game, shooting 48.5 percent overall from the field and scored at least 20 points in two of the four quarters. Defensively though the Pack’s opponent was able to connect on 51.6 percent for the game and shot at least 45 percent from the field in all but one quarter. The Cowgirls also held the upper hand on the glass, outrebounding Nevada by a 41-24 margin.

Wyoming looked to have the game in the bag as the third quarter drew close to an end, holding its largest lead of the game at 14 with 3:09 on the clock. Nevada began chipping away at the deficit though and was able to make it an eight-point game heading into the fourth quarter. The Pack made things interesting within the first few minutes of the quarter, cutting it to a four-point deficit twice. As soon as momentum would swing in Nevada’s favor though, the Cowgirls would hit a big shot to halt any type of run.

The Cowgirls were able to push their lead back up to double digits as they took a 78-68 lead with 2:06 remaining. Nevada wasn’t done yet however as a triple with 29 seconds on the clock by sophomore Essence Booker brought the Pack within six. A Wyoming turnover gave possession back to Nevada, where Booker’s layup with 14 seconds left made it a four-point game. Needing to foul though, the Cowgirls were sent to the foul line twice in the last 14 seconds and made all four of their attempts to seal the win.

Booker led the Wolf Pack in scoring, totaling 17 points on 8-of-15 shooting. She has been a source of consistency lately for Nevada as she has now scored in double figures in 11 consecutive games. Sophomore Imani Lacy was right behind Booker at 16 points, which included being 2-of-2 from beyond the arc. Fellow sophomores Amaya West and Hamilton each added 13 points. West posted an all-around solid game in her 32 minutes, adding five rebounds and four assists.

Nevada will conclude the 2019-20 regular season with a road contest at San Diego State this Thursday, Feb. 27 at 5:30 p.m. PT from Viejas Arena.