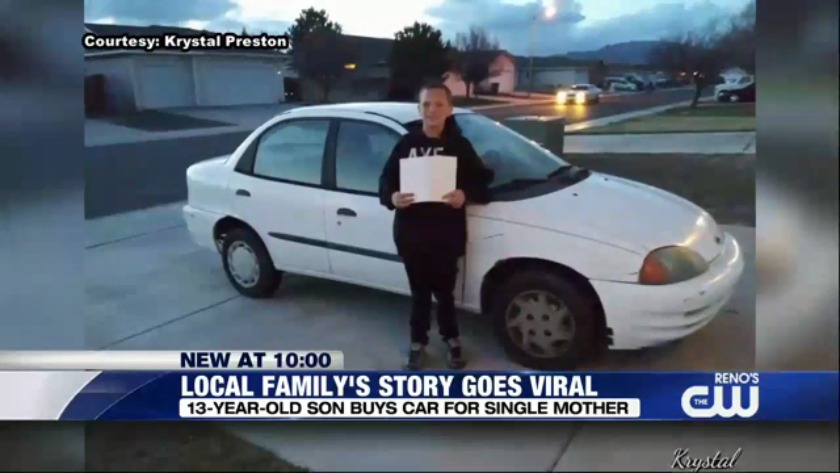 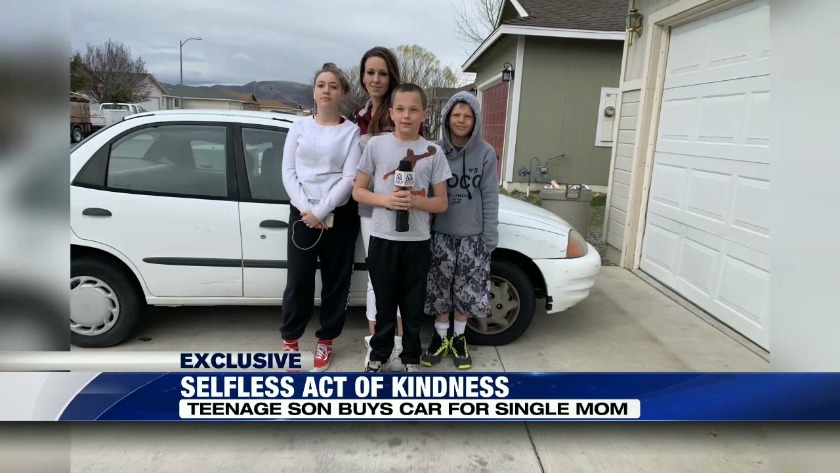 FERNLEY, Nev. (KOLO) -- A local family recently started life over after an unfortunate and unexpected situation. Krystal Preston, the single mother, lives in Fernley with her three kids and three dogs and is trying to make ends meet with no means of transportation.

"At my low point, here comes my son," Krystal Preston says. “Everybody goes through rough patches in their life, but there's good that can come from any situation as long as somebody with a heart does it."

Her oldest son, William Preston, 13, does yard and house work for people in his community to make a little extra money. Being the oldest man in the house, he knew he wanted to help provide for his family.

"I saw on YouTube where people get their mom a car and then surprise her with it,” William said. “I wanted to do that."

William was scrolling on Facebook and saw a woman selling a 1999 white Chevrolet Metro.

“It was really cheap so I asked her if I could trade it or earn it, and at first she said no and after she thought about it, then she said yes," William said.

After negotiating with the woman, William’s quest soon became reality. He then went home to tell his mom the news.

"Mom, I got you a car and she didn't believe me," William said.

William and Krystal walked outside their home, and sure enough, the woman selling the car was there waiting for them. She drove the two of them to her house where the car was parked. Krystal was stunned.

"I lost it, I bawled, I was just like, there's no way,” Krystal says. “And then she gave me the keys and the paperwork."

Even with a few quirks and a little work needed, Krystal says the car is perfect.

"The fact that my kid did this, I'm proud but as a mom I'm supposed to be able to take care of my kids, I'm supposed to do this, not the other way around," Krystal said.

After the deed was done, Krystal posted the story on her Facebook page, where the story gained traction, even getting attention from a local radio station, 101.3 FM Biggest Little Radio.

"I did not by any means think that the next morning I was going to have a radio crew at my front door and it kind of goes from there," Krystal says.

But William didn’t buy his mom a car for the publicity.

"I didn't really want that to happen, I just wanted to do it, that's all," William said.

At last check, the Facebook post had dozens of likes, comments and shares. A teenage son’s selfless deed proves that age is just a number and you can make a difference at any time.

"What 13-year-old buys their mom a car? I don't know any,” Krystal says. "I can't even express it; there are no words that can express my gratitude and how proud I am."

EDITOR'S NOTE: KOLO has received a number of offers from viewers to help the family. A GoFundMe page has been set up for donations. You can also contact the family at: