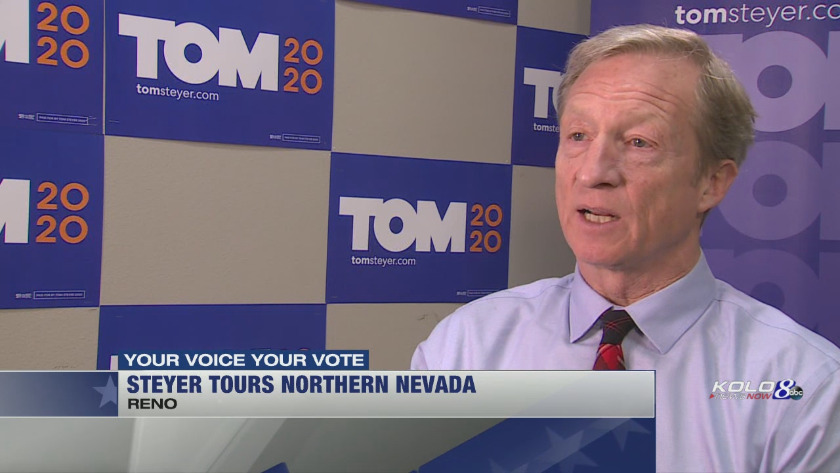 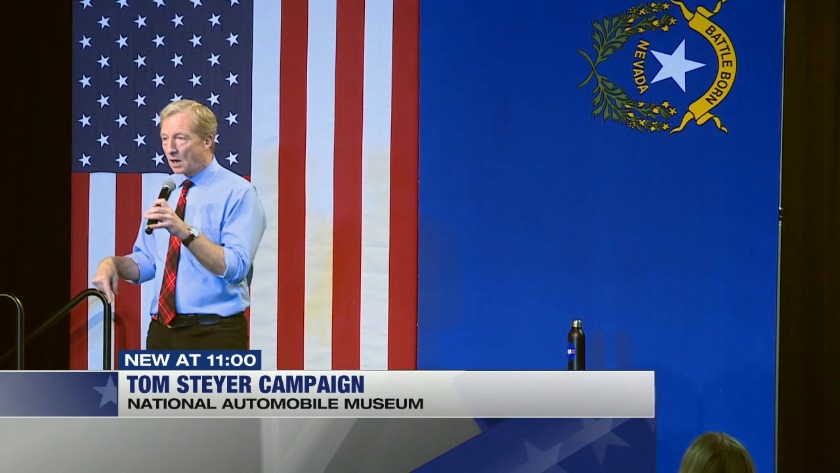 SPARKS, Nev. (KOLO)-- Democratic Presidential Candidate Tom Steyer predicts a good showing during the Nevada Caucuses on Feb. 22, 2020. The candidate says he personally spent more time in our state than any other presidential hopeful.

Candidate Tom Steyer at his campaign office in Sparks. Photo by Terri Russell/KOLO.

Presidential hopeful Tom Steyer says he has ties to the Silver State that go back a ways. Years ago he was a ranch hand in Gardnerville.

But his involvement in Nevada did not stop there.

Steyer says he is uniquely familiar with the state.

Besides running for president, he helped finance a ballot question here two years ago which passed. Question 6 requires Nevada to buy 50% of its power from renewables.

“I am not looking past Nevada for a second,” he says in a one-on-one interview at his Sparks headquarters. “Nevada is a critical state as far as I'm concerned. It is a statement from me, and everybody, that actually you can do well in the diverse Democratic Party.”

Steyer says Iowa and New Hampshire, where he did not perform well, are in the past.

He believes he will place in the top three at the end of the Nevada Caucuses. He's touring Northern Nevada until Feb. 12 garnering a much support as possible. He says he enjoys campaigning because he gets to meet people one-on-one.Here in Nevada and elsewhere he says, despite the question, it is all about one thing.

Steyer says he wants to expand on Obamacare--not force everyone on to Medicare. He believes in term limits. And global warming he says is the biggest threat to not only America but the world.

He was one of the first with a megaphone to call for the impeachment of Donald Trump. He says he does not regret his position and says the acquittal spoke volumes.

“Their willingness to do a gigantic cover up,” Steyer said. “And to proclaim him innocent until the facts come in, has made him even more corrupt. I think that is true. And I think the only way… we have to beat him at the polls.”

Steyer opened his Carson City Office on Feb. 12. This is his fifth office in Nevada

Around 100,000 Democrats voted during Nevada Caucus

Seventeen and caucusing for the first time.

TMCC professor weighs in on expectations for NV caucus

Around 100,000 Democrats voted during Nevada Caucus

Seventeen and caucusing for the first time.

TMCC professor weighs in on expectations for NV caucus