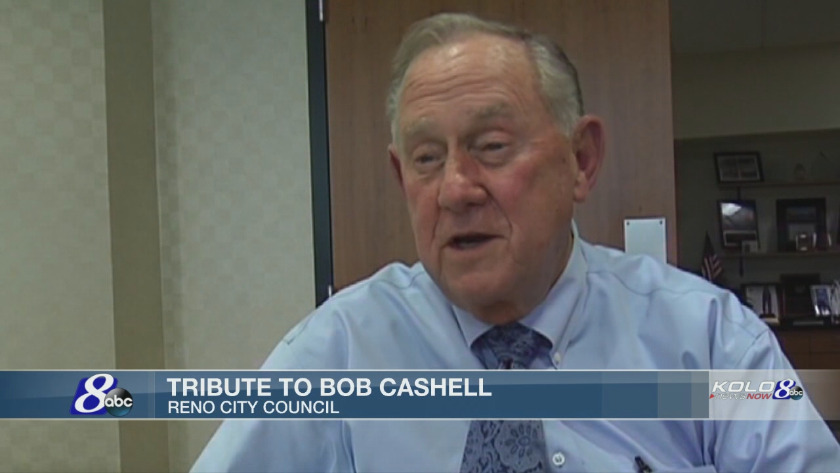 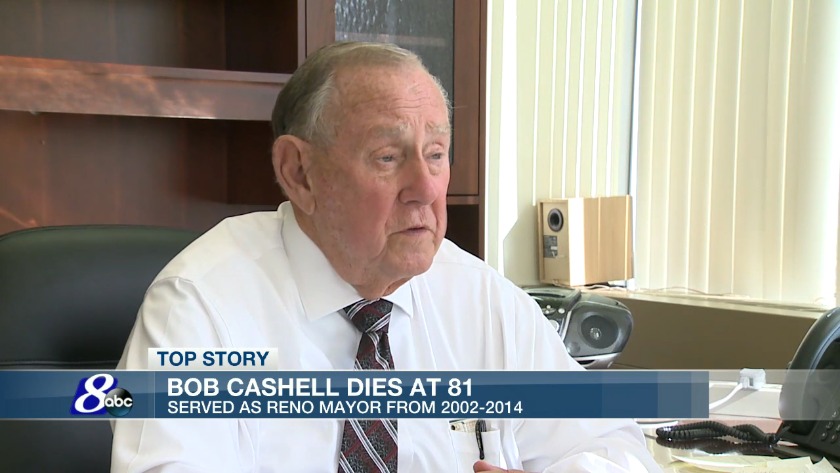 The Cashell family confirmed his passing with this statement:

Robert ‘Bob’ Alan Cashell, beloved husband, father and grandfather, passed peacefully this morning at St. Mary’s Regional Medical Center surrounded by family, friends and special members of the Reno Police Department who he worked with during his time as Mayor of Reno.

Cashell was born April 22, 1938 in Longview, Texas. Though he would always be a Lone Star son, he built his life in the Silver State. Bob married his beloved wife Nancy just weeks before they moved from Texas to Nevada in 1964.

Cashell began his public life in 1979 when he was elected to the University of Nevada System Board of Regents and was immediately elected chairman by his peers. He was the first freshman regent to be elected chairman and served in that position throughout his term.

He was first elected Mayor of the City of Reno in November 2002 and served until 2014. He oversaw a period of tremendous growth for the city including transformative projects like the opening of the ReTrac train trench, Triple A ball park, downtown Reno events center and ballroom and a $1.5 million whitewater park, the first of its kind west of the Rockies.

Cashell helped transform the Reno City Council and had a one of a kind relationship with City of Sparks mayor Geno Martini.

“Bob was my cohort and partner in crime,” Martini reflected. “We were mayors together at the same time and I always told him I was the mayor of Sparks and he was the mayor of ‘East Sparks.’ He leaves a wonderful legacy to Nevada. He championed many causes and got a lot of things accomplished for our great state as well as for the University of Nevada. He will be sorely missed.”

Though for many he was simply known as “Mayor,” he was also a prominent businessman. His professional experience included working as chairman of the board of Cashell Enterprises, a hotel, casino and resort management company and owning the Alamo Travel Plaza and the Topaz Lodge. He bought Bill & Effies, a truck stop, in 1967 and renamed it Boomtown Reno. He sold it in 1988 after transforming the property into a casino resort. Throughout his tenure as a gaming executive, he has been associated with some of the leading resorts in Nevada and other states.

“Bob Cashell loved Reno almost as much as he loved his beautiful wife Nancy and his wonderful family,” said Gary Carano, executive chairman of Eldorado Resorts, Inc. “Although we didn’t know it when he first arrived from Texas over 50 years ago, Bob was destined to be a remarkable gift to our state and to Northern Nevada – he poured out his heart and soul to make us all better. He encouraged us to reach higher, he comforted us when we fell short, and he never stopped trusting that anything is possible if we stay positive and believe in one another.

“From Bill and Effies Truck Stop to Boomtown to the Board of Regents to the State Capitol to the Mayor of Reno, he always had a special knack for what his customers and constituents needed and wanted. He was a cherished friend to the Carano family and admired by many throughout Nevada and across America. His legacy will live on.”

“There are few, in the entire history of Northern Nevada, who have had such a profound impact on our community,” said Rick Reviglio, owner of Western Nevada Supply. “Wherever you look, Bob’s fingerprint is deeply embedded. He and the entire Cashell family have touched so many in our community. It has been an honor to call him a dear friend.”

“The Cashell family would like to pass along their most sincere thanks and appreciation to the entire staff at St. Mary’s Regional Medical Center,” said family spokesperson Jim Minor.

Details on service arrangements will be forthcoming.

Cashell is survived by his wife Nancy and their four children and nine grandchildren.

The City of Reno released the following statement Tuesday, February 11, 2020:

Our hearts are heavy today, as Bob Cashell, the City of Reno's former Mayor, passed away this morning. His passing is a mournful time, but also one of reflection. We look back on the influence and success of a man who gave tireless love and support to all of Reno and all of Nevada.

He called our state “The Home of Opportunity,” and he forged his own opportunity. He came to the Battle Born State as a humble truck driver and rose to prominence from City Hall to the state capitol.

Bob Cashell’s passion for education and the betterment of the next generation served him well on the Board of Regents. His homespun approachable attitude showed all of us that love and compassion make the man. He served as a model for what public servants should be.

Bob guided our city during our most turbulent times. His Reno was ravaged by financial struggle, but his resilient persona gave so many of our neighbors comfort in their darkest hour.

He always said that the businesses he built and the legislation he passed took a backseat to the people who helped those dreams become reality.

“It is with an extremely heavy heart to learn of the passing of Mayor Bob Cashell,” Reno Mayor Hillary Schieve added. “He touched so many lives with his larger than life personality. He loved the entire Reno community like they were his very own family. His legacy will forever be remembered as one of Reno’s greatest. We all love you, Cash, and will miss you more than you ever know.”

Bob Cashell was our everyman success story. He was a man who left Reno and Nevada better than he found it. He was our champion, and we honor his tremendous service and boundless love of home.

Former Reno Mayor Bob Cashell passed away this morning. My thoughts are with his family as they mourn a truly great Nevadan. I first met Mayor Cashell 20 years ago when he was running the Ormsby House in Carson City. He was always larger than life and he inspired me. He served as Reno’s Mayor from 2002-2014. He served Nevada’s 28th Lieutenant Governor from 1983-1987 and on the University of Nevada System Board of Regents from 1979-1982. God speed Mayor Bob.

The City of Sparks released a statement from Mayor Ron Smith saying:

I am deeply saddened by the news of Mayor Bob Cashell’s passing. Bob was a true friend and collaborator with the city of Sparks. He was always accessible, offered sound advice and never took himself too seriously. Bob’s contributions to Northern Nevada and his life of service will not be forgotten by our region. All of us at the city of Sparks will miss Mayor Cashell. His family is in our thoughts and prayers. Rest in peace, Mayor.

“A dedicated individual, Bob gave of himself freely and regularly to help build a better community. He always seemed to know the right words for any moment – whether they were words of encouragement or a quick joke.

“On behalf of all the men and women of the Washoe County Sheriff’s Office, Heather and I extend our deepest condolences to Bob’s family and all those who have been touched by the warmth and generosity of this great man.”

It is with an extremely heavy heart to learn of the passing of Mayor Bob Cashell.
He touched so many with his larger than life personality. He loved the entire Reno community like they were his very own family. His legacy will forever be remembered as one of Reno’s greatest! pic.twitter.com/E1HQ1prGJz

From serving on the Board of Regents, to his time as Lt. Governor, & Mayor of Reno for 12 years, Bob Cashell honorably served the people of Nevada over many decades. Thank you, Mayor & Lt. Gov. Cashell, for representing the City of Reno & our State with humility & integrity. https://t.co/ZKibOEklm9

May his soul rest in peace. https://t.co/WRDKOeRXvr

The men and women of the Reno Police Department mourn the passing of former Reno Mayor Bob Cashell. Through his vision, he transformed Reno into what it is today and supported “your police, our community”. Thoughts and prayers to the Cashell family.

As a Reno #nvleg delegation member, Bob Cashell and I tangled on some issues, but worked together on others. When I got to @CityofReno Council, I wasn't sure what he thought of me... it didn't matter. His perspectives were so valuable to me- he became a mentor. Thank you Mayor.��

I’m deeply saddened to hear of the passing of a dear friend and mentor, Mayor Bob Cashell. He was truly an icon in our region and his larger than life smile, laugh, and personality will be greatly missed. My prayers and condolences go out to the entire Cashell family. pic.twitter.com/cyy7XatWt3

So sad to hear the news of the passing of Bob Cashell. His dedication to Reno and love for the State of Nevada inspired Nevadans and helped our communities through some difficult times. Paul and I send our condolences to his wife Nancy and their entire family at this sad time.

Saddened by the news of Mayor Bob Cashell’s passing.

He was a lifetime servant of Nevada as a university regent, Lt. Governor, and Mayor of Reno.

My condolences go out to his family and friends during this difficult time.

Very saddened about the passing of Bob Cashell. Bob, an East Texas guy from Longview, we had much in common and he’d always make me laugh. Thank You Bob for all you did for Nevada Football, and everyone you touched in this Comminity. Thought and prayers to family.����#NevadaGrit pic.twitter.com/XdEYHjX0oy